Performance with Opera Familia in Groesbeek

On May 12 Amira performed together with Opera Familia in the Cardo Theatre in Groesbeek (The Netherlands). This concert, titled Swing along on ’45,  was organized to celebrate the 70th anniversary of the Dutch liberation.

Opera Familia became famous nationwide by participating in Holland’s Got Talent, back in 2011. Especially for this concert they had sung well-known tunes from the ’30s en ’40s, which we know from The Andrews Sisters and Vera Lynn. 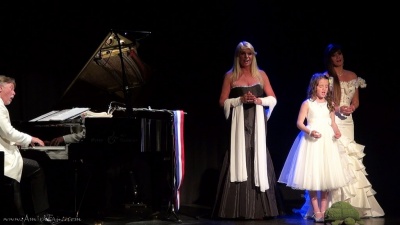 Amira was the special guest during this concert, singing not less than 4 songs: O Mio Babbino Caro, Voi Che Sapete, the beautiful Song To The Moon and a brand new one: the Ave Maria composed by Caccini, performed together with Opera Familia.

Before and after the concert as well as during the break, Amira was present at the stand of her Stichting Gelukskinders, to sign fans-items and to take pictures with her fans, who sometimes came all the way from France or England.

In below video (which includes subtitles) Amira thanks her audience for coming and supporting her charity foundation.