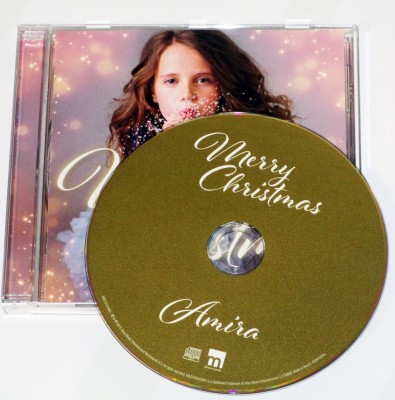 With her new album Merry Christmas, the 11-year-old Amira Willighagen gets you directly into a Christmas atmosphere. With her chrystal clear, angelic voice, Amira enchants the listener again, this time with song titles like Angels from the Realms of Glory, O Holy Night, What Child is This (Greensleeves), Ave Verum Corpus… a total of 12 tracks to enjoy again and again.

Amira, who -at the age of 9- won Holland’s Got Talent at the end of 2013, and released her debut album Amira in March 2014, again demonstrates her enormous talent, but also convinces the listener that she has developed in every way since then. The volume of Amira’s voice has increased in all registers, which makes her sound stronger, more powerful and confident. On top of that, the young singer has further been developing her own style, her own sound. On Merry Christmas, one hears Amira sing -not a copy of an operatic singer or a creation of her singing coaches-, so the time of comparing Amira with other (young) singers can be considered definitely over.

Solely for the purpose of Amira’s musical accompaniment on Merry Christmas, a musical ensemble has been compiled, consisting of violins, cellos, piano, harp and organ. By choosing to use an ensemble and not a full orchestra, the musical accompaniment is less abundant than on Amira’s debut album. The music is more modest, which actually fits very well with a Christmas CD. Also, with this choice, Amira’s vocal qualities are further highlighted.

Despite the very limited number of hours devoted to singing lessons & coaching, it still remains unbelievable how Amira can be singing so beautifully… A true talent!