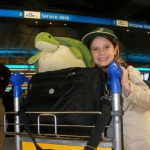 On top of that, Amira will be filling in her wish to help poor children and build them a playground. The place where the first playground will be built with Amira’s contribution, has been found. Amira will be helping the children of the township Ikageng, part of Potchefstroom, a university city in the north-west of South-Africa. There’ll be a ceremony in which Amira will donate a cheque to start off construction of the first playground. More details and photos will follow as soon as we receive them.