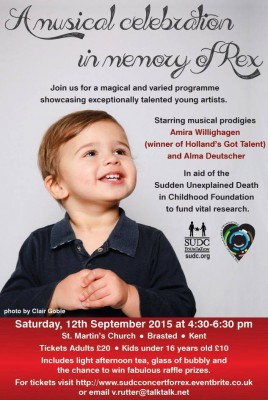 On Saturday September 12th Amira will perform during a special concert in memory of Rex, a 21 months old boy who suddenly passed away on February 7th this year. Mother Camilla: “Rex was a happy, healthy and extrovert little boy with a twinkle in his eyes; A ray of sunshine with the gift to make other people smile and laugh aloud. We brought Rex to bed for his afternoon nap and he never woke up again.”

The cause of Rex’ sudden death remains unknown, and is categorized as SUDC (Sudden Unexpected Death in Childhood).

With the concert that will be held on September 12th in Brasted (Kent, United Kingdom) Rex’ parents Paul en Camilla want to commemorate their son and raise money for SUDC.org, a worldwide organization which is dedicated to funding crucial research into the causes and prevention of SUDC, and supporting families affected by such tragedy.

During the memorial concert Amira will perform together with other very talented young artists, such as the 10-year-old composer/pianist/violinist Alma Deutscher, who finalized a complete opera this year, based on the story of Cinderella.